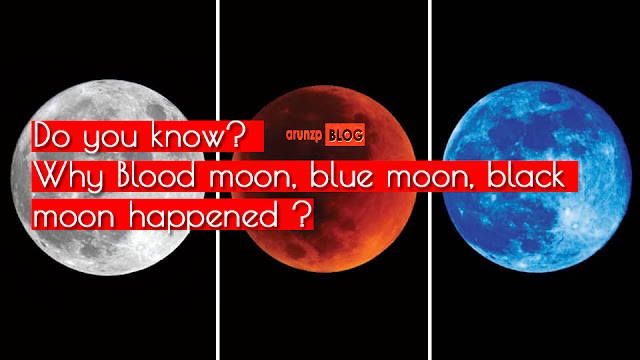 A rare celestial event will take place on July 27 when the moon will be visible to the naked human eye in reddish colour. Scientists say this will be the longest lunar eclipse of the century and they have named this as ‘blood moon’. Reports say the entire event will unfold over a course of four hours. Many now wonder as to why it’s called blood moon.
Black moon, blood moon, super moon, blue moon – what’s the difference between all these moon types? In most cases, these names are given as per the position or phase of the moon and the Gregorian calendar. 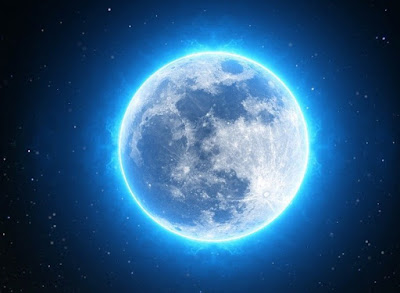 The term ‘Blue Moon’ is said to have originated in the 1940s and started being used only a few decades ago. This phenomenon has nothing to do with its color. In fact, it looks the same as any other full moon. A blue moon is the second full moon to occur in a month and sometimes, it is the third full moon in a season.
On January 31 this year, people were in for a triple treat as a blue moon, a supermoon and a complete lunar eclipse — all rolled into one — mesmerized the world. Such a lunar trifecta was a rare phenomenon and had not happened in over 150 years.
his year’s second blue moon was on March 31 – the second and final one of this year. Two blue moons in one year seem to contradict the idiom ‘once in a blue moon’ which indicates something rare. In fact, it is quite rare to have two blue moons in a single calendar year. The phenomenon last took place in 1999, on January 31 and March 31. This won’t happen again until January 31, 2037.

‘Once in a blue moon’

You must have heard of the phrase ‘once in a blue moon’. In a 2012 article in Sky and Telescope Magazine, Philip Hiscock says that this term is around for 400 years. He further adds that the earliest use of this term was like saying the moon is made of green cheese, which indicated something absurd.
According to Hiscock, a folklorist at the Memorial University of Newfoundland, the meaning evolved to ‘never’. Later, it turned out that the dust in the air can also cause the moon to turn green and blue all over the world, an event that NASA said is thought to have originated the phrase ‘blue moon’. Even dust storms and forest fires can cause the moon to turn blue. The meaning of ‘once in a blue moon’ gradually changed from ‘never’ to ‘rarely’. 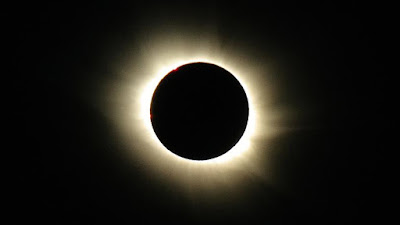 The second new moon in a single month is called the ‘black moon’. It is somewhat an unusual celestial event, occurring about once every 32 months. But there won’t be much to see. At its ‘new moon’ phase, the moon is always black. A new moon refers to the moment when the moon’s Earth-facing side is fully in shadow. The moon’s dark or illuminated side faces Earth during a Black Moon. 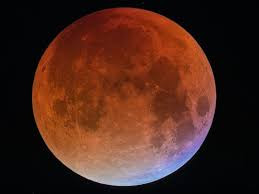 The ‘blood moon’ happens during a total lunar eclipse when the earth passes in between the sun and the moon which blocks the sun’s light from falling directly onto the moon. The little light coming from the edges of the Earth’s atmosphere lit up the moon’s surface making it appear red or reddish brown. Unlike solar eclipses, there is no need of special equipment to observe lunar eclipses and can be viewed with the naked eye.
This year’s blood moon will take place on July 27 which is also being termed as the longest lunar eclipse to take place in a century. The eclipse will be visible in two parts, first of it being a total lunar eclipse, followed by a partial eclipse both of which will last for over an hour. The phenomenon might take up more than four hours to run its course, according to various reports.
According to NASA, the ‘blood moon’ lunar eclipse to occur on July 27 will be the longest one and is just four minutes short of being the longest lunar eclipse to have ever been seen from Earth.
Not many know that the supermoon makes the moon appear 30 per cent brighter and about 14 per cent larger than typical full moons.
Supermoons don’t occur every month as there are chances that the moon’s orbit changes direction as the earth goes around the sun. It means that the full or new moon won’t always happen at its perigee.

What is the Full Wolf Moon? 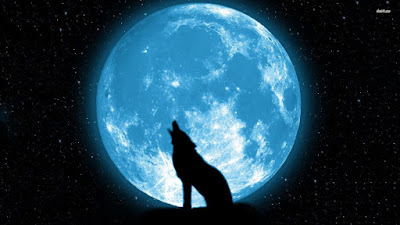 The Full Wolf Moon is also known as the Old Moon, Moon after Yule and the Snow Moon. According to space.com, it denotes the first full moon in January. This dates back to early colonial times when the wolves would howl outside the villages.
தலைப்பு
informations
Related Article